Do you want to search?

Madrid, 8 October 2014. For the last several years, Madrid has been slowly becoming an international capital when it comes to gastronomy. A significant percentage of all foreign visitors to our region come here specifically for the excellent cuisine. A fusion of the most traditional part of our cooking and the most cutting edge techniques can be found in this destination, which receives more than 10 million tourists each year.

Thanks to the collaboration of the Regional Government of Madrid, an initiative has been put into place in which our most successful chefs will be cooking shoulder-to-shoulder for an entire week in various spaces and restaurants in the city of New York. The week in The Big Apple celebrating Madrid’s culinary culture will take place November 3-8, and will feature journalists, foodies and New Yorkers alike.

Chef David Muñoz, who has 3 Michelin stars, and is also culinary Ambassador of Madrid, was chosen to select the chefs who will join him on this culinary escapade to the United States. He has put together an unbeatable team to represent Madrid in New York.

These representatives of our most current cuisine will be in New York for one week, which is sure to be an incredibly intense experience for them. They will take the opportunity to learn about other cuisine and other ways of understanding gastronomy. This undertaking will position us far beyond our own borders from a point of view that is 100% culinary.

David Muñoz will be preparing a dinner together with chef Matthew Lightner in his restaurant Atera (2 Michelin stars) on November 3rd. A superb menu created by two geniuses of international cuisine.

For David Muñoz, this trip will be especially intense. The day before he joins Lightner, on Sunday November 2nd, he will be running the New York marathon. Twenty-six miles that David has been training to tackle for months now, awakening the depths of his athletic soul when he goes out for his run each night after the last meal is served. The chef has involved those who follow him on social media by keeping them posted as to his daily training regimen. 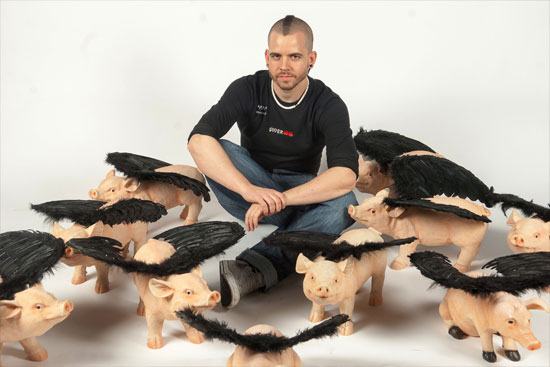 In just five years, David Muñoz has become a huge kitchen celebrity. Winner of the National Gastronomy Award and recipient of 3 Michelin stars, he has two different projects: DiverXO, sophisticated cuisine that draws on different countries, flavors, textures and haute cuisine techniques. And StreetXO, a new experiment, the concept of refined and stylized street food, using the techniques and preparation of haute cuisine. The concept is totally new, revolutionary and transgressive. As of July 2014, the new DiverXO is located in the NH Collection Eurobuilding, and David will open a new StreetXO in London within the next few months.
www.diverxo.com 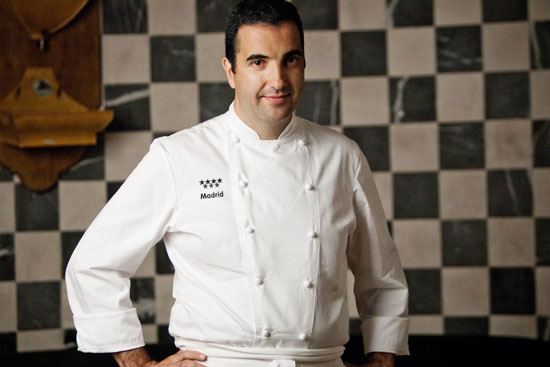 In 2001, Óscar Velasco arrived at Santceloni at the invitation of chef Santi Santamaría. Moving in the culinary direction of Santceloni restaurant, located in the five-star Hesperia Madrid hotel, marked a watershed moment in his career. Santceloni opened its doors in March of 2001, the same year it was honored with its first Michelin star. And just two years later, the restaurant was bestowed with a brilliant second star.
www.restaurantesantceloni.com

These three chefs, who have all worked in different restaurants in Madrid, are behind one of Madrid’s most impressive gastronomic successes in recent years. Javier Goya, Javier Mayor and David Alfonso opened TriCiclo in the central Barrio de Las Letras quarter with the idea of offering tasty food in an informal setting. The restaurant has received numerous awards in its very first year. The chefs represent the latest when it comes to conceptual cuisine.
www.eltriciclo.es 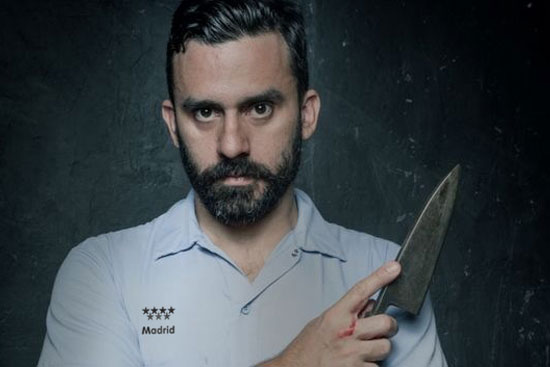 After working at Daniel (New York), La Cote D’or (Burgundy) and Llers (Buenos Aires), among others, the chef began his professional career in Madrid with the 2005 opening of Sudestada restaurant. This was followed in 2012 with Chifa and in 2014 with Picsa. Serving as Gastronomic Director for the Bestiario Group (www.bestiariogroup), he brings together all of his culinary business concepts. He is a cosmopolitan with no limits. Born in Buenos Aires, he has lived and worked in the world’s most influential cities. Estanis Carenzo is true genius of flavor. A businessman and creator of gastronomic concepts.
www.sudestada.eu

*Each chef is designing his own menu, with the ingredients and dishes that define him best.

Chef Lightner has behind him a range of renowned restaurants including four times voted “The World’s Best Restaurant”, Copenhagen’s Noma, but especially San Sebastián’s Mugaritz.
In 2010 he was named one of Food & Wine’s “Best New Chefs in America”, also receiving nominations for the Rising Star Chef award by the James Beard Foundation in both 2010 and 2011, and was included in Restaurant Hospitality’s list, named as one of the “10 Chefs to Watch”.
Since opening in March 2012, Atera has earned numerous accolades including a 4-star review from New York Magazine, a 3-star review from The New York Times, a spot on Bon Appetit’s Best 50 New Restaurants list, Esquire’s Best New Restaurants list as one of the Chefs to Watch, and was, in 2013, named StarChefs’ Rising Star.
Atera relies greatly on Chef Lightners innate connection to time and place to create a completely unique dining experience. The menu is a modern play on traditional flavors and is totally dependent on what is available daily therefore changing accordingly.
The intriguing fine dining counter holds two stars in Guide Michelin
www.ateranyc.com

Betony is a Modern American restaurant overseen by Executive Chef Bryce Shuman (the former Executive Sous Chef of Eleven Madison Park) and General Manager Eamon Rockey (formerly of Eleven Madison Park, Atera, and Aska). The restaurant is located a block off of Fifth Avenue and features soaring ceilings, contemporary photos of New York City street scenes, a 35-seat bar and lounge, and 85-seat dining room.
Bryce Shuman grew up in Chapel Hill, N.C. and was exposed to diverse food at a young age courtesy of his mom, a cultural anthropologist, who would bring the whole family along on field trips to places such as the jungles of Costa Rica and the Arctic. After cooking at a local N.C. restaurant where he would meet his future wife, Jenn, he moved to San Francisco to enroll at the California Culinary Academy during the day and work at Wolfgang Puck’s Postrio at night. Upon graduation, he joined the staff at Rubicon, where he was mentored by acclaimed chefs Stuart Brioza and his wife Nicole Krasinski (now of State Bird Provisions). Upon returning to the east coast he joined Daniel Humm’s team at Eleven Madison Park, where he worked for six years and was promoted to Executive Sous Chef, overseeing a staff of 40. Outside of Betony, Bryce’s hobbies include blues guitar, taking shots with his Polaroid Reporter SE, and annoying his cats.
www.betony-nyc.com

CITY GRIT is a Culinary Salon – a gathering of people under the roof of an inspiring host, held partly to amuse one another and partly to refine taste. Recently lauded by Zagat as “One of the Most Innovative Restaurants in the Country,” CITY GRIT offers food-culture events, anchored by dinners whose tasting menus each center on a particular theme or ingredient. The dinners are created and conceptualized by Sarah Simmons, named one of “America’s Greatest New Cooks” by FOOD + WINE Magazine in 2013. Simmons acts as perennial host, serving up her signature Southern-influenced fare as well as hosting a series of well-known and emerging guest chefs from around the world looking to showcase their culinary talents in New York City.
citygritnyc.com

The vibe in this tiny well designed restaurant is one that is hard to come by in nyc/brooklyn: it’s laid back, doesn’t take it self too seriously despite being serious about food, the price is reasonable, the people watching is always good, and as a diner you don’t have to make any decisions, it is all done for you. The young chefs behind this ” tasting menu only” spot are talented, ambitious and willing to go out on a limb and do, –what many find one of the trickiest/balsiest things to do in NYC –open a restaurant.
Fabs and Jeremiah, like many great designers, have found a way to harness their creativity through the use of constraints. Their constraints being budget, seasonality, total number of courses and time. They do not start from scratch each week, instead they build off of the foundations of what they know works. A slight change of sauce here and addition of produce there. These constraints keep them honest and give them the ability to make more with less, innovating carefully through one small iteration at a time.
“This was truly expressive cooking, exploring shades of flavor more watercolor than acrylic.” Pete Wells, NY Times
www.contranyc.com

The Community of Madrid has more than 53,500 restaurants in a sector that employs more than 140,000 people. A total of 13 of its restaurants have at least one Michelin star, and the region has five restaurants with two Michelin stars – more than any other region in Spain. In addition, 63 restaurants boast a Sun from the Repsol Guide. These establishments and their chefs are contributing to the fact that tourists have better and better gastronomic references in Madrid, which can be added to existing cultural, shopping and leisure options.

In the last 10 years, the Community of Madrid has gone from receiving 5 million tourists to more than 10 million. The number of visitors has doubled, and more than half of these tourists acknowledge that gastronomy was one of their main reasons for coming to the region.

David Muñoz, tourism “ambassador” for the Community of Madrid

Chef David Muñoz, with three Michelin stars, has been serving as tourism ambassador for the Community of Madrid since January of 2014. He has incorporated the region’s 7-star flag in his brand image and he will be creating a dish in honor of the region. Muñoz will take the name of Madrid with him all over the world, where he will take part in major tourism events. The chef, who will soon be opening a restaurant in London, represents all entrepreneurs from Madrid.

Tourism is fundamental for the social and economic development of the Community of Madrid. With the objective of re-launching Madrid as a tourist destination, on December 20th, 2013, the Community of Madrid signed a broad-based agreement with the main public and private agencies in the sector, through the Madrid Tourism Association, in a pact to join forces. Thanks to this agreement, multiple promotional activities are being developed that have resulted in a 12% rise in the number of tourists in 2014.

From Madrid to New York. For the Foodies of the World.